I know it’s a little late to be discussing Valentines Day but that’s sort of my style when it comes to the day itself. I think everyday should be love day. I would rather be spoiled on some random day then a day that Hallmark pressures my man to do it for me. For this reason, it is not much celebrated in our household. I’m sure my man feels blessed to have gotten off the hook for so many years.This year I decided to at least recognize the day. I want my boyz to grow up to believe in Valentines Day because they may not have a lady friend that feels the same way as me. See, I’m being a good mom by thinking of them. Now I may have saved some heartbreak in the future….

The night before Valentines Cohen saw a burger commercial on tv and of course, because it was past bed time, he decide he should cry about the fact he couldn’t have one. I explained that it was impossible. Pointing out that if I went to town to get him a burger I would not be able to make it home with his burger the same night. He decided that it wasn’t worth it but then continued to express, through long dragged out whining, that Dad should do it. I then promised him burgers for Valentines dinner.

That was the first part of my Valentines plans. I decided to get a card for my other half and some Scratch & Wins. When I gave the card to him that day he was of course caught off guard. What I thought was a sweet card (see image below) he thought was my way of telling him I was preggers….lol 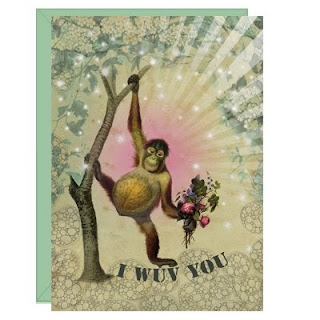 No I’m not preggers! But I do agree the monkey on the card has a well rounded tummy ;)

So we scratched tickets…won some, lost some and later bought more. We sat at the kitchen counter with Cohen and taught him to gamble while eating the box of smarties I had earlier picked up for his gift. Followed by a burger dinner. It was the perfect evening!

Then I watched The Bachelor. Of course, watching that show is sad but truly makes me think, “Wait, I do want that kind of romance!!! Next year I will demand something expensive, tropical, planned and funded by someone else with a soundtrack!”

Love to my boyz! No matter where we are or what we are doing, everyday is love day!